I now know I’m not the only one for whom consuming potatoes is akin to eating poison. 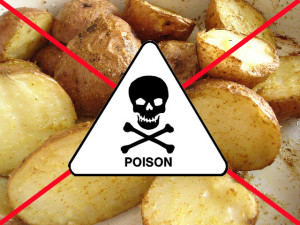 was the only person in the world as I had never heard of anyone being intolerant to potatoes. Looking online only backed up my feelings at there wasn’t much info about potato intolerance; all I could find was info about intolerance to the whole nightshade family (which includes tomatoes) which I knew I was not.

As I am sure many of you will have done, when you find you have an allergy/intolerance to a food, you go looking for information to understand what this means for you, how and why it may have happened. I have to say finding no information online that seemed to fit my symptoms made me feel like a bit of a freak. But I knew without a doubt that not only was gluten a “no go” for the rest of my life but now potatoes were too.

In case you are curious some of the main symptoms I experienced after eating potatoes were very similar to gluten, with the bloating and gas. But I also would get extremely drowsy within 30min of eating potatoes to the point where I would struggle to keep my eyes open for the next 2-3 hours followed by the next few nights of complete insomnia with constant tossing and turning trying to get comfortable. Needless to say this did little for my mood the next day though it’s hard to say if that was due to the potatoes or the lack of sleep!

A year or so after uncovering this potato intolerance, in 2008 when Goodness Me did their first expo with our bread and baking mixes (which were of course gluten free, free from the top 8 allergens and also potato free) I finally discovered I was not alone with my gluten and potato intolerance. It was at the expo where I saw the look of delight on peoples faces when they realised they could use our mixes because unlike so many other gluten free foods they were also potato free! Upon chatting with them further I was told about their discovery of their potato intolerance, which mirrored mine, in that like gluten, potato caused them to have a wide range of health and digestive issues.

So I present to you the findings of my unofficial survey of the 100’s of people that I have had the opportunity to talk with since that first expo in 2008 which concludes that approx. one third of people with coeliac or gluten intolerance also get similar side effects from potatoes.

It seems strange to me that this link is not talked about more online (though in the past year I have seen potatoes added to the list of Gluten Cross Reactive Foods – a topic for another post). So part of my reason for this blog post is to let others know that you are not a freak, you are not alone and you are not imagining the symptoms! If you are still getting symptoms despite being gluten free I encourage you to please do a food elimination trial to see if potatoes might be the reason. I also think we should be more vocal about this gluten-potato link in the hope that food manufacturers will wake up and take notice and stop putting potato starch or potato flour in their products!

Have you already discovered that you are in the one third of coeliac and gluten intolerant people for whom potatoes are poison? Let me know in the comments below.